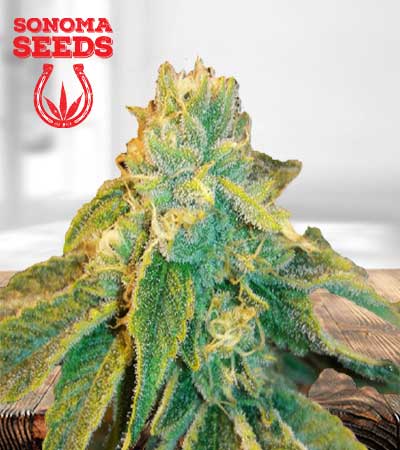 The Birthday Cake strain is also known as the Wedding Cake, which might confuse most consumers. Regardless of which name to use, this Indica-dominant strain has a sweet flavor profile that resembles the pastry to which it is called after. Its breeder is still a mystery, but the genetic mixture comes from crossing the Girl Scout Cookies and Cherry Pie. Indeed, it is a dessert material strain that is best used after a long and stressful day. The soothing effect does not only provide comfort but can also alleviate mental and physical ailments.

When growing the Birthday Cake, feminized seeds can be used for better production yield as it guarantees that about 99.99% are female and able to produce weed. Cultivators who do not have much time on their hands can be spared from the time-consuming process of identifying and segregating male plants.

What are the Flavor and Effects of Birthday Cake Feminized?

The flavor profile of the Birthday Cake takes after the sweet and earthy notes of the Girl Scout Cookies, whereas the fruity tang with a tinge of vanilla is from the Cherry Pie. Once inhaled, a resemblance of an oatmeal cookie with berry-flavored ice cream on top manifests. This combination of flavors lasts on the taste buds for some time, which may entice smokers to hit more puffs.

While an explosion of wonderful flavors is happening in the mouth, the mind is occupied by a cerebral buzz that starts not long after the first huff. It is a potent strain that begins with an overflowing amount of bliss wherein worries and pessimistic thoughts are removed. Senses are enhanced, and sounds, pictures, and the surrounding seem fascinating. During this time, ideas easily emerge, which can be beneficial for artists who are having a hard time due to creative blocks.

After a while, the long-lasting Sativa effects fade, and a physical buzz is released all over the body. This will make the body feel heavier, leading the smoker into a couch-lock state and eventually sleep.

What are the Medical Benefits of Birthday Cake Feminized?

The Birthday Cake does not only cater to recreational users, but the rate of those who use it for medicinal purposes has been increasing as more studies continue to prove its contribution to the medical community. Its properties have been known to alleviate individuals with not only mental ailments but physical as well.

The chronic pains associated with migraines and arthritis can be relieved through the pain-killing and anti-inflammatory properties that the Birthday Cake possesses. Those with insomnia can use this strain as an alternative to the synthetic sleeping pills on the market. It can knock you out into an undisturbed slumber.

Psychological illnesses such as depression, anxiety, and PTSD can be eased when consuming Birthday Cake due to its mood-enhancing properties that are able to clear any gloomy thoughts that often cloud the mind for these patients. The soothing effect that this strain offers can be used to unwind after a stressful day. It is important to have a worry-free mind from time to time because an overwhelming amount of stress can cause severe conditions such as over fatigue.

Negative Effects You Can Expect from Birthday Cake Feminized

Like anything in the world, the Birthday Cake also has some disadvantages. When taken in a dehydrated body, the smoker becomes prone to irritations and itchiness caused by the dry mouth and dry eyes. It is essential to consume water before and after smoking. The high THC level of up to 25% can be harmful to those sensitive to the component. Lastly, as much as it is enticing to consume a higher dosage of this strain because of its flavor profile and effects, the potency level might stop your endeavors because harmful side effects such as paranoia, dizziness, and heightened anxiety can occur.

How to Grow Birthday Cake Feminized?

The Birthday Cake inherited most of its physical characteristics from the Indica. It looks similar to a pine tree with its dark and huge leaves paired with dense foliage. What makes this plant stand out is its humungous colas and buds covered with an abundant amount of resins.

This plant is known to be greedy for calcium and magnesium, which is why growers need to monitor the levels frequently to prevent nutrient-deficiency. In an indoor environment, the Birthday Cake should be exposed to a temperature of around 70°F. The Sea of Green method using soil or hydroponics can boost the efficiency of the production process by producing a higher amount of buds within a limited space and time. This plant can be harvested after 56 to 70 days and give a result of up to 21.16 oz/m2.

Outdoors, the Birthday Cake, is best grown in a warm and sunny climate and can even thrive in a harsh environment. Cultivators can expect up to 28 ounces per plant that should be harvested around the middle of October.