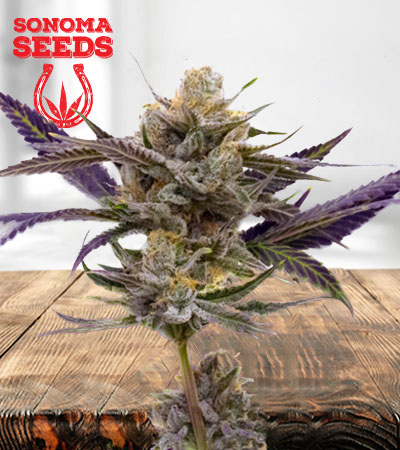 Skywalker Autoflowering is known for having a 50:50 Sativa/Indica ratio, making it a well-balanced strain. Blueberry and Mazar I Sharif were combined to produce this fantastic hybrid. Skywalker Auto has sage green buds dotted with purple dust and coated in light orange hairs, making it appear to be a rather stylish weed. This strain is sticky and resinous, with a dense coating of trichomes contributing to its gleaming appearance when exposed to light. Cultivators will enjoy this strain because it is simple to cultivate, but harvesting its abundant yield will take nine to ten weeks.

As Skywalker Auto is ignited, it emits a sharp scent that quickly dissipates in the breeze. It has a pleasant fragrance reminiscent of a blueberry field and the fresh smell of sweet fruits. Skywalker’s intense aromatic sensation is just a taste and experience glimpse of what’s to come. This strain has a solid sweet blueberry taste, making it easily detectable by more seasoned users. It also has undertones of spice and tastes like new pine cones and fruits. Skywalker Autoflowering stands out from the crowd because of its flavor explosion.

What are the Flavor and Effects of Skywalker Autoflower?

Skywalker Autoflowering’s flavors and fragrances are so enticing that you can’t help but drool as they brush your palate and diffuse throughout the room. It has a heavy berry scent with hints of sweet fruits. Its flavor is similar to that of blueberries but with traces of pine and spice. Skywalker Autoflowering stands out as a crowd favorite due to the whole sensual experience it provides.

This strain is prevalent among experienced cannabis users. They were drawn to Skywalker Auto because of the potent indica impact. As a well-balanced combination, it makes users feel euphoric, joyful and uplifted at the same time. Its ability to calm nerves and induce total relaxation transports users to a five-star resort staycation. The warm and fuzzy feeling that follows the buzz fades into a couchlock and often tranquilizes the body, which is why it’s best used in the evening or as a nightcap smoke.

What are the Medical Benefits of Skywalker Autoflower?

The refreshing and calming effects of Skywalker Auto make it an excellent stress reliever. In addition to its indica and sativa effects, this strain’s CBD content makes it suitable for medicinal use. It has anti-inflammatory and muscle-numbing properties, making it ideal for treating muscle pain, joint pain, and migraines. It also contains antidepressant elements, which are effective in treating mood disorders, anxiety, and depression. Skywalker Autoflowering is undeniably a fascinating strain that provides not only recreational but also medical benefits.

Negative Effects You Can Expect from Skywalker Autoflower

When the high wears off, it usually comes with a slew of undesirable side effects. Minor headaches and dizziness have been noted. Severe cases typically result in paranoia, which is why it is strongly advised to consume in moderation. Furthermore, the typical side effects of various cannabis varieties, such as cottonmouth and dry eyes, are also present in Skywalker. These side effects, on the other hand, can be avoided by drinking plenty of water.

Skywalker Autoflowering is a straightforward plant to grow. It’s a small plant that only grows to be 90 cm tall, but it can yield up to 500 grams per plant outdoors and 400 grams per square meter indoors. Buds with berry, pine, spicy, and sweet flavors will fill your expanding space right away. It’s usually recommended for indoor use, but it can also thrive outdoors, especially in Mediterranean countries, hot, dry, and sunny. Given the long wait, Skywalker Auto is expected to produce around 14 oz/m2 when indoors and about 18 oz per plant when outdoors in just nine to ten weeks. This indica-dominant plant is resistant to mold and mildew, making it suitable for first-time marijuana growers.