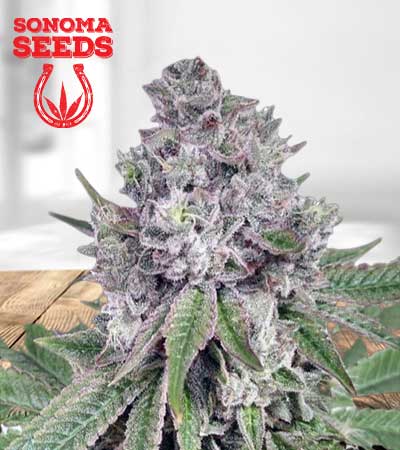 The Grapeness Feminized marijuana strain is an Indica-dominant hybrid with an 80:20 Indica to Sativa ratio. The strain has a high THC content which ranges from 18% to 26%. Its effects pronounce both its Indica and Sativa properties. It has mint green leaves and olive green nugs, which adds depth to the plant. Grapeness Fem’s buds are coated in dark amber pistils that are abundant with snowy white trichomes, reflecting its potency. Users can expect both mind and body high when consuming the Grapeness Feminized strain.

What are the Flavors and Effects of Grapeness Feminized?

Grapeness Feminized marijuana strain exudes a beautiful aroma of fresh sweet berries and undertones of damp soil which is common in most marijuana strains. On the tongue, the flavors reflect the aroma only more intensely. It leaves a sweet aftertaste on the tongue and lips.

Consumption of the Grapeness Feminized marijuana strain brings a great cerebral high that leaves users happy and joyful for hours. However, its Indica effects are where this strain shines the most. The relaxing body buzz is one to crave as it soothes every inch of the body. No muscle is left unrelaxed. All pain and tension are promised to be washed away with Grapeness Feminized. It also has sedating effects which lull its users to a night of deep, uninterrupted, blissful sleep.

What are the Medical Benefits of Grapeness Feminized?

Grapeness Feminized is a great choice for both recreational and medical cannabis needs. It treats a variety of ailments without the terrible side effects common in most synthetic drugs. Those opting for a more organic way of treatment should give this strain a shot as it is packed with lots of medical benefits. Patients experiencing severe pain, such as in multiple sclerosis and Parkinson’s disease, should find refuge in this strain’s effects. It also has analgesic and anti-inflammatory properties that help relieve arthritis, muscle pain, tension, fibromyalgia, and many more medical conditions. Its mood-enhancing properties have helped those with mood disorders battle their depression, anxiety, and chronic stress. Last but not least, this strain’s sedating effects help those with sleeping disorders such as insomnia finally achieve a night of deep and blissful slumber.

Negative Effects You Can Expect from Grapeness Feminized

Like most marijuana strains, the Grapeness Feminized, when smoked, may cause slight discomforts such as cottonmouth and dry eyes. Cottonmouth may be alleviated by increasing fluid intake before, during, and after the smoking session. Meanwhile, dry eyes can be soothed by using over-the-counter eye lubricants, this can also prevent further irritation. When consumed in large amounts, the Grapeness Feminized strain may cause severe side effects such as triggering anxiety and depression as well as paranoia. Novice smokers and those sensitive to THC are advised to refrain from overindulging and start low and slow when smoking the Grapeness Feminized.

Growing the Grapeness Feminized may be done both indoors and outdoors. The strain prefers to be cultivated in a sunny and humid environment. Expert breeders claim that cultivating this strain indoors would cause too much moisture buildup and eventually lead to molds and mildew growth which harms the plant. When pursuing indoor cultivation, growers are advised to invest in proper ventilation systems to ensure the strain’s health. In optimum conditions, the plant produces robust and healthy buds. After seven to eight weeks in the flowering period, growers can expect to harvest delectable buds.

Be the first to review “Grapeness Feminized Marijuana Seeds”