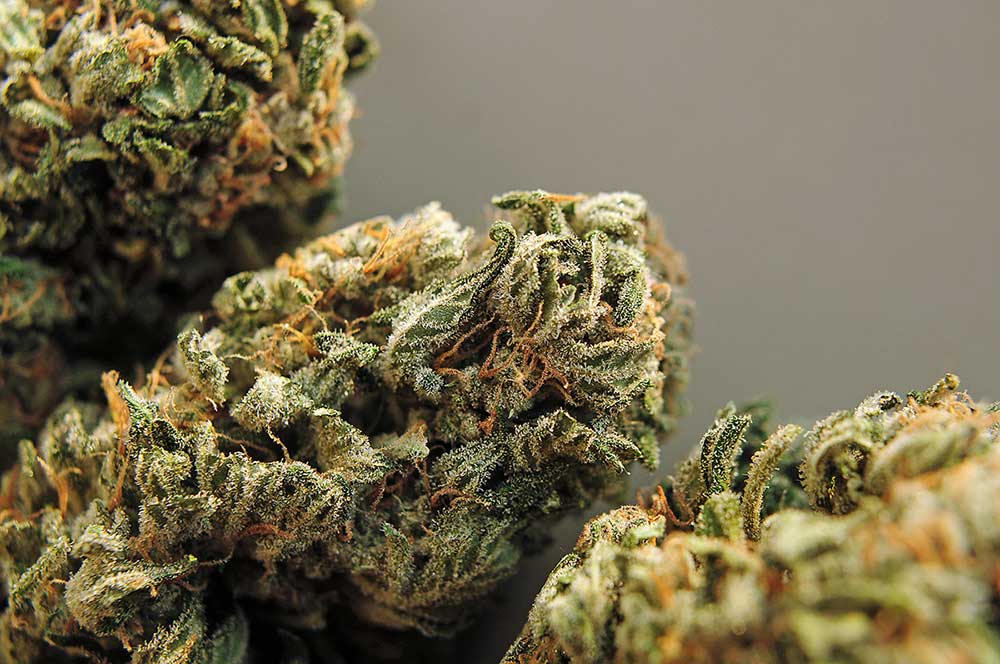 Bruce Banner Cannabis: One Hulk of a High

With the just released Avengers, Endgame and its box-office blowout of 1.2 billion dollars opening weekend, now is the perfect time to give Bruce Banner a shot. This potent plant will quickly transform from a small unassuming sprout into an unstoppable bud-producing green machine.

Taking first place in the Denver Cannabis Cup in 2013, this cross between OG Kush and Strawberry Diesel boasts an average THC content of 23%, and has been reported to produce as high as 30%. It was also awarded High Times rating as the strongest strain in 2014. So just like its name-sake, it is able to shatter records and punch well above its weight.

And weighty it may be. The combination of high potency and excellent bud-production make this strain a top THC producer. When grown in a well managed indoor environment this strain can produce 300 grams of dried bud per plant, and when seeded in the great outdoors can generate half a kilogram. When grown indoors with advanced techniques such as sea of green, screen of green, and topping and defoliation, it may produce up to 600 grams per square meter, no small feat given the intricacies of most sativa dominant plants; clearly there’s more to this guy than meets the eye.

Bruce Banner is a moderately difficult strain to grow, so may not be a wise choice for the complete novice, but since it is such a high THC producer, judging your yields by bud-weight alone may not give you the full picture. As like so many cannabis strains, it is suitable for both earth based and hydroponic growing environments. Bruce is able to tolerate colder climates then many marijuana strains, being perfectly happy anywhere from 18-27 degrees Celsius or 65-80 degrees Fahrenheit. It prefers lower humidity levels, and will not tolerate fall rains if grown outdoors. When growing indoors, cropping upper stems to promote a bushier plant will help to increase your yields.

In the comics series Bruce Banner’s transformation into the hulk was caused by a selfless heroic act. While working as a physicist for the American military, Banner is irradiated during a test of a gamma bomb. Bruce runs onto the test range to save a civilian who has accidentally driven onto the site, and while saving the bystander, Bruce is exposed to gamma radiation from the bomb. This irradiation mutates his body so that periodically he is transformed into the Hulk. Out of Bruce’s compassionate act to spare the life of another, the Hulk is born.

The Bruce Banner strain also can trace its origins to another compassionate act. On November 7, 2000, Colorado adopted a constitutional amendment legalizing marijuana production and consumption for medical use. Since federal prohibitions on the drug still were, and are in effect, state institutions avoided directly becoming involved in the manufacture of marijuana for patients, either allowing patients to grow their own medicine, or procure it from a designated third-party.

This hodgepodge of competing state and federal regulations gave rise to the movement of compassion-clubs or dispensaries, which were private organizations which helped patients source the marijuana products they had been medically prescribed. Since the dispensaries both provided ready cannabis products and seeds for at home cultivation by patients, this seen became an active space for breeding and experimentation with genetics and strain hybridization. Out of this movement came Bruce Banner, a hybrid strain with a complement of characteristics from its Sativa and Indica lineage.

In the marvel universe hulk undergoes many iterations, his transformations between the mild-mannered scientist and the stressed-out superhero play like a modern-day Jekyll and Hyde, and in fact Stan Lee sites Stevenson’s novel as inspiration in the character’s creation. Unlike the man, the plant manages to balance its dual nature, providing a high which combines some of the most sought after characteristics of both Indica and Sativa strains resulting in an ideal hybrid. With such a high THC content, this strain is bound to come on strong, it provides an immediate blast of utopia and high energy creativity.

But as any wine or spirits enthusiast will tell you, the best experiences aren’t captured in a single note, but have a complexity that changes over time, and in this Bruce Banner doesn’t disappoint. The onset of the euphoric energy of its opening notes slowly shifts into a powerful body high that effectively deals with chronic pain and anxiety. This makes it an effective medicinal solution as you don’t have to pair effective pain relief with unbreakable couch-lock. Like the technique of downing an espresso before a quick nap to combine the benefits of sleep and caffeine, the Bruce will get you moving for the day while soothing your body and mind with the benefits that Indica strains provide. Many satisfied users particularly recommend Bruce for dealing with chronic pain and anxiety based conditions.

Taking its genetics from two already popular strains, OG Kush and Strawberry Diesel, Bruce has a unique flavor that matches the rest of its personality. Again, balanced might be the best way to describe it. When hitting the nose, notes of diesel and sweet fruit are immediately apparent, however its taste profile moderates the sharp and sweet with its darker flavors of unsweetened citrus layered with earthy undertones. The density of the buds provide a smooth smoke, combined with its balanced flavors and complex trip this is a strain that is just waiting to transform your trip.

Now if only the Hulk was fortunate enough to have a spliff of Bruce Banner around, he’d be a lot more chill, although maybe not as entertaining on the big screen.