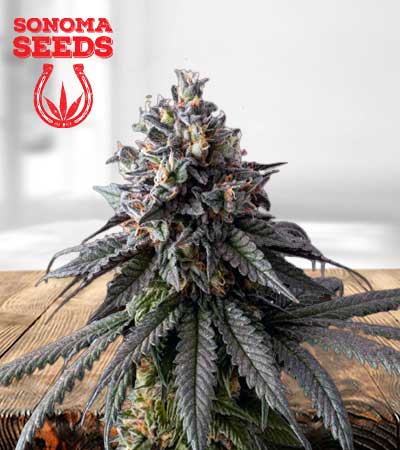 Gelato 48 is an Indica-dominant cannabis strain that is known for its delectable flavors and potent effects. Its Indica to Sativa ratio was found to be 55 percent Indica and 45 percent Sativa, suggesting that consumers should expect a nearly balanced combination of effects from this strain. THC levels range from 20% to 25% in this strain. The high THC content in this cannabis will result in a potency of mental and physical highs that will please its users. Its amazing genetic lineage, which includes crossing the intoxicating Sunset Sherbet with the potently balanced phenotype Thin Mint Girl Scout Cookies, will provide users with a diverse range of mixed highs that recreational and medicinal cannabis users will enjoy!

What are the Flavor and Effects of Gelato 48 Feminized?

Gelato 48’s pungent scent will warn everyone in the room that a jar has been opened and is ready to be lit. The aroma can be so intense that adequate ventilation equipment in the grow room is often recommended to vent away from the strong pungent smell. This may also be a concern if the cultivator chooses to cultivate them outside because the smell can quickly spread to the neighbors’ homes. Its sweet and fruity scent is initially noted with strong hints of a strong earthy scent present in the background. When these buds are lit, keep them secret from the public because the pungency will increase. Strong earthy goodness flavors mingle with fruity flavors, with traces of blueberry and citrus as an aftertaste.

Gelato 48 Effects is a fast-acting, high-impact strain. A ringing effect can often be felt by the consumer even before the first puff of smoke is exhaled. The powerful Sativa head rush requires time to calm down before users get used to the initial effect, so disorientation and confusion are typical side effects. It produces a euphoric head high that is accompanied by an improvement in moods and emotions. When the energy-boosting effects wear off, some psychedelic effects will emerge, with visual and auditory perceptions being blurred. A surge of warm waves of spine-tingling sensations will envelop the user’s entire body as these hallucinogenic highs take hold, opening the way for full-body sedation. This profoundly calming effect reduces the energy-filled cerebral high while still allowing users to remain mobile and alert. Overall, when no other events are scheduled, this herb is better ingested later in the day or early evening.

What are the Medical Benefits of Gelato 48 Feminized?

When it comes to medicinal value, the Gelato 48 Marijuana strain can be very useful. Its analgesic effects make it suitable for treating chronic pain, back pain, muscle spasms, and joint inflammation due to its highly sedating properties. Medical marijuana patients are in a pain-free environment, allowing them to walk about freely while enjoying their high. Patients suffering from stress and depression are really looking forward to using this weed to treat their depression and stress because it will block out any negative or pessimistic thoughts that could be lurking in their minds and stop them from becoming productive. When high on this weed, the users are handled by inducing good thoughts to fill their minds, resulting in increased vigor and a positive disposition.

Negative Effects You Can Expect from Gelato 48 Feminized

Apart from the popular cottonmouth and dry eyes, there have been no recorded or confirmed severe side effects from Gelato. As a result, this can be quickly remedied by drinking plenty of water when high on cannabis and applying hydrating eye drops to help relieve those irritated eyes.

Gelato 48 Feminized Marijuana Seeds are not the easiest to flourish once you have them. While they can be grown both indoors and outdoors, it is preferable to grow them indoors because it allows for a more regulated environment. Warm temperatures and humid conditions are needed for them to thrive. To maintain this consistency, indoor growers must keep a close eye on increasing room conditions. A few days before the plant begins to bloom, expose it to cooler nighttime temperatures to bring out the purple coloration and improve the plant’s potency. They will flourish and be happy if you keep them like this. They’ll begin flowering in 8 to 9 weeks and be ready for harvest in 8 to 9 weeks, yielding a satisfying above-average yield!

Be the first to review “Gelato 48 Feminized Marijuana Seeds”